Your cart is empty.
Visit Shop
Product is not available in this quantity. 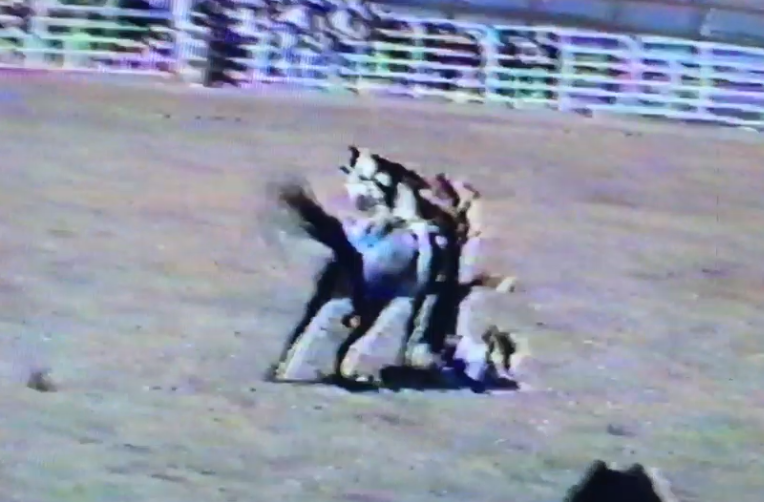 A first person account of being killed and learning to live again.

I was eighteen years old. It was my senior year of high school, my first year as president of the Campbell County High School Rodeo team. I was doing good that year, and was privately proud of myself for leading the State standings at the time in my favorite event--saddle-bronc riding. I had worked hard to do well that year, with college coming around the corner. I was already set to attend the College of Southern Idaho, and planned to live at Shawn Davis's place breezing his racehorses in exchange for room and board in his bunkhouse. I had been advised by Tom Wagner to take the offer, since Shawn was a winning rodeo coach with a lot of horses I could get on. More horses. That's what everyone said I needed was more horses to get out on until it was second nature. A few more years and I could be a contender to make a good run in the pro's.

As you can see in the video, I was getting bucked off by the fourth or fifth jump. My rein was too long, and I was going to buck off the front-right side. I blew my left stirrup, then I could feel my foot go through it. I knew if I went off the right side that my foot was not going to come out of the stirrup, and I would be hung up. That is one of the worst feelings a bronc rider can feel. I was about to feel the other worst feeling a bronc rider could feel. When I tried to pull myself back in the middle of his back, pulling on the rein bent his nose and neck around and essentially rolled him over on top of me when he took a big leap up and too the right.

I was pulled on the rein to keep from bucking off, but he gave me his nose so I had no leverage to pull myself upright. I couldn't buck off like I should have been able to do, with my belly down, but instead was flipped to my back. The worst possible position to be in as a bronc rider. Both my legs were over his back and when my head touched the arena dirt, the full weight of that horst folded me in half just above my belly button.

I could tell my legs were touching my face, and I felt an electrical shock down my legs. It felt like my back and my ribs were folded in two, and a burst of light occurred, along with a high-pitched ringing in my ears. I had no breath in me. It was a violent feeling. I felt a blast of rocks and gravel in my face and instinctively tried to roll away from the horse, but I could not move or feel anything from my waist down. When the first person reached me I had enough air left in my lungs to say "I broke my back" with my last breath. I was thinking this is how it feels to be paralyzed and how I'm going to die; because I can't breathe. Then I lost consciousness.

My dad can be seen running to me with a camera in his hand, he said he thought I was dying. My eyes were rolled back, I wasn't breathing, and my heart was racing. He and the others prayed for me while the ambulance was called into the arena.

I do believe God preserved my life. I was paralyzed for sure, I know I could tell. But even that, as I'll share with you in future articles, was not his plan for me. It's taken me all these years to decide I want to talk about the journey my life has been so far. For whatever reason, it's time for me to write about it, without knowing necessarily the reasons why. I have some idea, and I think I know who my audience is. But God will do what he will do, when he decides, and it's always for a purpose.

Next time I'll tell you more about my injuries, and what happened that day.

I thought I was dying, and I was terrified because I couldn't take another breath. I wanted to breath in a big breath of air, but it felt like I was stuck and my diaphragm wouldn't work. I was eighteen years old, and I had just been crushed by a saddle-bronc horse competing in a high school rodeo in Riverton, Wyoming.

You ever play around when you are young exhaling and seeing how long you could go without breathing in? You know the fear you have when you aren't allowed that oxygen? That's what I remember in that moment, plus I felt like I had been crushed, and I couldn't move and I knew my spine was crushed.

I woke up, and while they loaded me in the ambulance I fought the urge to panic because I couldn't breath, except for these little jerking breaths of air.

I was taken by ambulance to the hospital in Riverton where they x-ray'd my back and found that I did indeed have a severe spinal fracture. From there they flew me to Salt Lake City, to the University of Utah Hospital. I didn't realize it was two whole days that I laid in the ICU before they operated on me until recently looking over the post-operative reports. I broke my back on the 5th of May, and on the 7th, Dr. Harold Dunn operated on my back for the first time.

The L1 vertebra had suffered a burst fracture and had basically exploded in to pieces. Vertabras on top and below that one had also broken into pieces, but it was the L1 region they were most concerned about. I couldn't feel pin-prick sensations really at all, since there was an electrical zinging and tingling that overwhelmed everything except squeezing or pressure, which I could feel in one foot, but not really in the other one. I could barely move my big toes, but I couldn't feel myself wiggling them if that makes any sense, and my other toes didn't work. I couldn't lift my legs at all, or move at all to speak of from the waist down. I was in bad shape, and they would only let me lay flat on my back for those two days without a pillow on a hard bed of some kind.

The orthopedic surgeon, Dr. Harold Dunn, was most concerned with decompressing the spinal cord, since it was showing a 70% reduction in space there around L1, and there were bone fragments that were pushing into the spinal cord. The surgery was all posterior, where they cut me down the back and after decompressing things they grafted the broken area together and installed Harrington rods on the backside.

The surgery did improve some sensation and motor function, but my bladder didn't work, and my right quad and left calf muscles didn't seem to work at all. I remember the days of working with the physical therapy guy, Bob, and having milkshakes once in awhile from the nurses. They wanted to keep me there for a rehab portion of a few months to learn how to care for myself and function with a spinal cord injury, but it was located in the basement of the hospital I thought, and so it seemed very depressing to me. I wanted to go home.

Tommy Wagner picked me up in his Ford van, just like the one I imagined I would some day be traveling in to earn my PRCA card a few weeks before. He picked me up and I laid flat on the floor of that van all the way home to Wyoming.

I've seen a lot of doctors since breaking my back in 1990. I went the next 12 years of my life hurting all the time. A month after the accident and first surgery, one of the  Harrington rods broke loose at the top where it attaches to the spine. I had such excruciating pain down my right leg that I could not sleep or bring myself to eat. In desperation I went to see a local orthopedic doctor and he said "that's just how it's going to be for the rest of your life". And he sent me home with a script for Amitriptyline.

Finally after a month of enduring that horrible tooth-ache pain down my leg, I was taken back to Salt Lake City to see the original surgeon who put Harrington rods in, Dr. Harold Dunn. He could see the Harrington rod failure that the incompetent and uncaring orthopedic doctor in Gillette missed. Dr. Dunn gave me the option of another surgery to install larger rods and to try and decompress my spinal cord more, with the hope I could regain bladder function. The spinal canal was still showing a 40% reduction at the L1 level, so it was possible some nerve function and sensation would return if that were increased. The surgery went well, but I did not regain bladder control or the ability to control bowel function. It did eliminate the majority of the excruciating pain I was feeling down my right leg, and therefore it was a success.

I have not had another back surgery since then, and that was in 1990, although I hurt every single day.

At the same time this was going on I was reusing my catheters, and because of that I developed a recurring chronic infection of the urinary tract and prostate. The infection would sometime spike a fever, and at other times it would cause extreme bouts of diarrhea. I did not know I had the infection, but I started to feel like something was killing me. I actually thought maybe the metal implanted in my body was leaching into my blood and poisoning me.

I would occasionally be given a 2 week course of antibiotics, and I noticed after taking them my pain would decrease for a few weeks.

Products from this story

Thank you! Your are now subscribed.
Oops! Something went wrong while submitting the form.